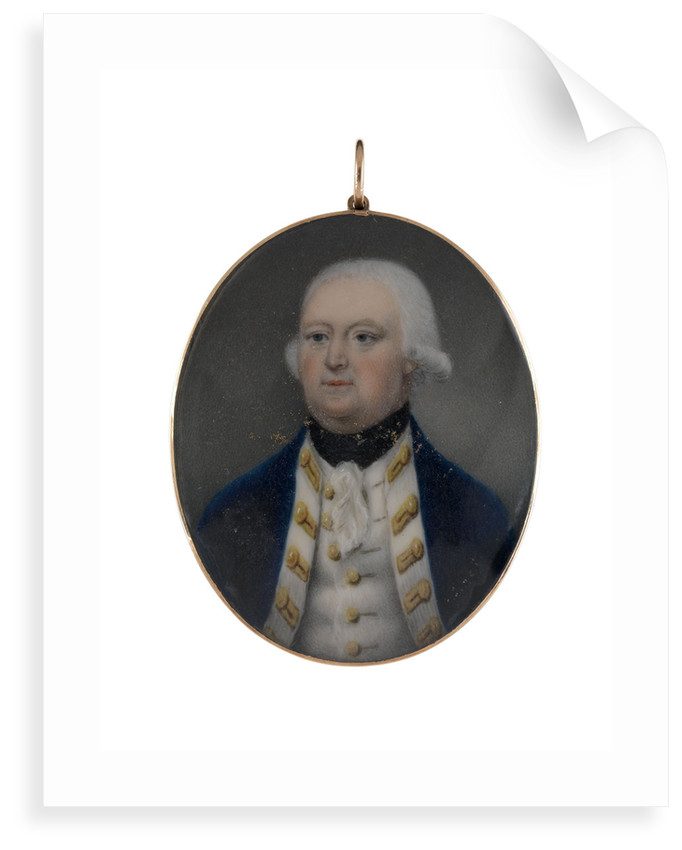 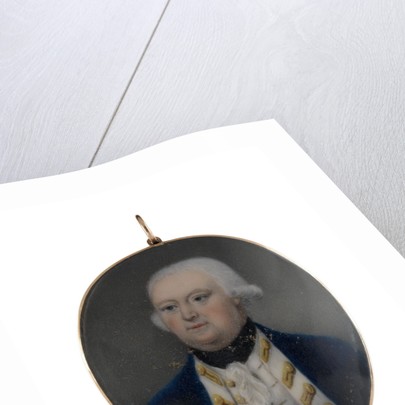 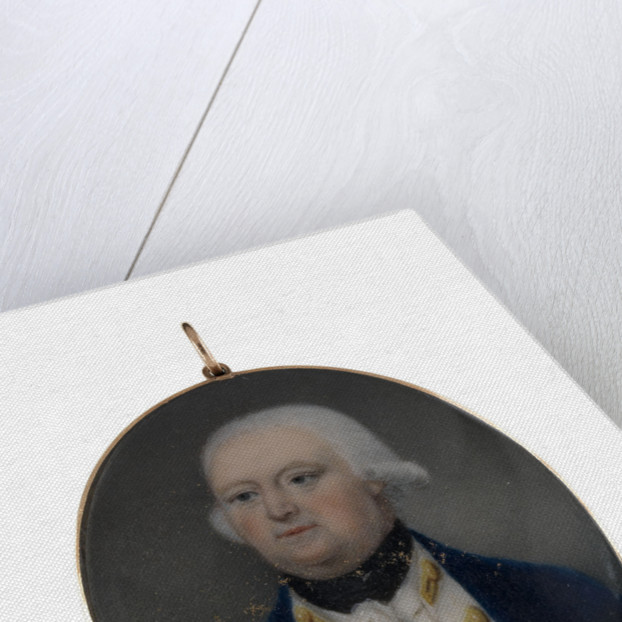 An oval miniature in watercolour on paper in an oval gilt metal suspension frame, with a glazed back containing hair with an overlaid gilt monogram, GAD or GASD. The sitter is shown short bust-length, facing forward, but looking slightly to his right, wearing flag-officer's undress uniform c. 1774-1783 and a short white wig. Darby is said ( web sources), to have been second son of Jonathan Darby III (d. 1742/3) of Leap Castle, King's Co., Ireland. He became a naval lieutenant in 1742 and a captain in 1747. As such, he saw considerable active service in the Seven Years War, 1756-1763. He became a vice-admiral in March 1779, when the Navy was convulsed by both the political consequences of the inconclusive Battle of Ushant of 1778, after the French entered the American War, and the soon-fulfilled threat that the Dutch would join France and Spain as the American rebels' allies. Political considerations meant that a number of senior admirals refused to serve at the time and, despite lack of active fleet experience, Darby was appointed commander of the Channel Fleet late in 1780. He proved a model of steadiness, resolution and tact, and soon became both liked and respected in this principal pillar of national defence. Over the next two years he competently handled a number of difficult situations at a time that the Navy was particularly weak, though (partly by chance), without any fleet action against what would usually have been superior odds. These included commanding the second relief of Gibraltar from a Spanish siege in 1781, and effective dispositions to defend the Channel against potential incursion by a Franco-Spanish fleet of 40 ships to his 21 later that year. Victorian denigration of him for not actively seeking and / or finding combat, whatever the odds, are therefore ill-judged. When Lord North's administration fell in 1782, taking Lord Sandwich with it as First Lord of the Admiralty, he resigned and retired. In poor health, he died within three weeks after his second wife in November 1790. Darby had two sons by his first wife, Mary St Quentin (d.1773), who was daughter of Sir William St Quentin, 3rd baronet, of Scampston Hall, Yorks, Receiver-General for Ireland and MP for Hull. Her brother William, 4th baronet, died without issue in 1795, his heir being Darby's eldest son William Thomas, who on inheritance changed his surname to St Quentin. The second son, Matthew Chitty Darby (1772-1823), was a major-general in the army, and called Darby-Griffith from 1801. The first name of Darby's second wife (n

More by the artist unknown.